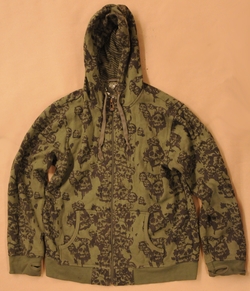 Mounties need your help to identify a suspect in a vicious stabbing at the Coquitlam bus loop in mid-December.

The 19-year-old victim was stabbed several times, including once in the heart. He had to undergo major surgery. Cst. Andrew Coupe says the suspect threw away an army-green hoodie with skulls on it after the  attack in the early hours of Dec. 15 (2011).

Coupe says the suspect boarded an eastbound SkyTrain at Granville in Vancouver around 11 p.m. on Dec. 14 before getting off at Braid shortly before midnight. He says the man then caught a bus to the loop. He was last seen running on Lougheed towards Westwood Street.

The suspect, who was captured on surveillance video, is white and in his 30s. He has a lean face, square jaw, and pronounced cheekbones. Police also say the suspect had bad body odour.

“In cases of assault where the victim and suspect are unknown to each other, it can be difficult to identify the suspect. But we are making every possible effort, given the nature of the crime,” explains Coupe.

Police also found a knife near the bus loop.

If you have any information, you’re asked to call the Coquitlam RCMP Major Crime Section at 604-945-1477.